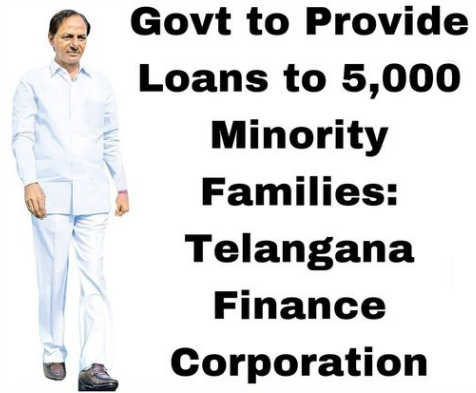 Continuing its welfare programmes for the minorities, the Telangana government has approved a Rs 50 crore budget to execute the “Bank Linked Subsidy – Economic Support Scheme” for minorities, which is expected to benefit 5,000 minority families in the state. Under this scheme, eligible minority beneficiaries will be provided with a loan of Rs 100,000-2,00,000 depending on category.

The Minority Finance Corporation official said the Corporation has divided loans into two categories, first one lakhs loans for 3,500 families and two lakhs loans for 1,500 families. “The government motto is to help poor people and make them financially strong, apart from this government have launched many schemes for poor minority people like Shaadi Mubarak, Education loans, etc., like this Government of Telangana helping the poor minority people with schemes,” the official added.“Now we are giving to 5,000 families and again we have planned to give 5,000 more families after a meeting with higher authority, we hope this will continue further and help more and more poor people by Telangana government,” Imtiyaz Ishaq stated.

The beneficiaries of the minority loan scheme expressed their gratitude saying the loans have helped them financially. Ibrahim, a beneficiary said, “I have received a minority loan which helped me financially, I thank Telangana government and KCR sir for helping the poor minority people and now Telangana government has sanctioned 50 crores rupees for Minorities welfare schemes by which thousands of people will be benefited.”