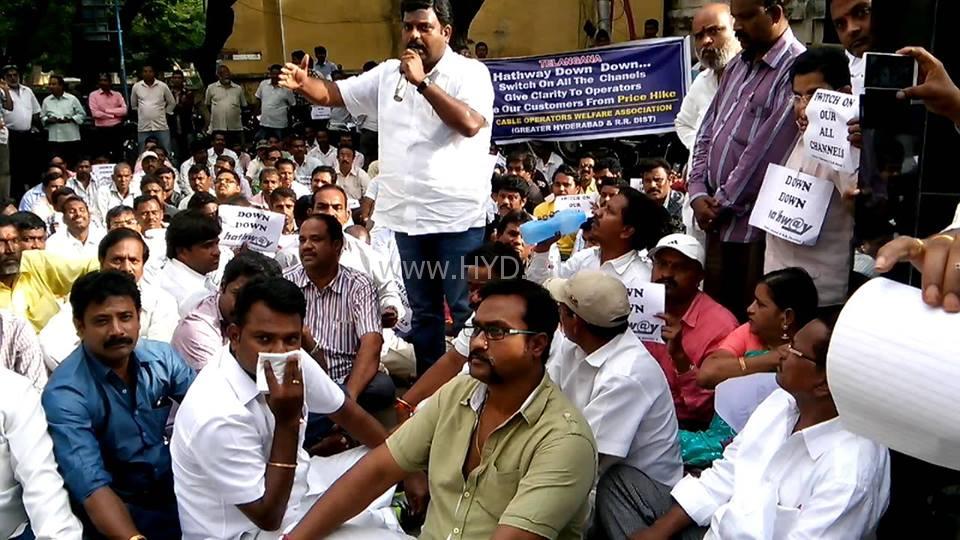 The transition from analogue cable connections to digital set-top-boxes (STBs) for Hathway customers has taken a new turn in absence of enough equipment.

The cable television operators affiliated to the multi-system operator (MSO) – Hathway service – on Friday protested before the service provider’s office at Himayatnagar, after they discontinued analogue service to customers.

The MSO’s decision falls in line with Delhi High Court order that had granted time for subscribers to switch to digital STBs. The last date for implementing the Digital Addressable System (DAS) was set on Jan 31, 2017 for phase-3 and March 31 for phase-4 viewers in the city.

Protesters claim that Hathway had disconnected the service for phase-4 viewers without prior notification.

The court had later pushed the deadline by two more weeks.

Cable operators say there is a requirement of over 20,000 new STBs but Hathway has been unable to meet demand. “We are getting angry customers and our reputation is being tarnished. The STBs they provide don’t get activated even after a week. They have been providing suscribers second hand STBs and there is an acute shortage of them,” Anil Bhatt of Dilsukhnagar, a Hathway operator, said.

The CISCO STBs which were supplied to viewers through dealers don’t work even after waiting for seven to 10 working days.

“There is a problem of the activated STBs getting deactivated within 24 hours,” Bhatt said.
“We will meet subscriber demands. We do have STBs and they will be supplied soon. There will be an initial shortage but supply will be streamlined in due time,” a Hathway representative said.