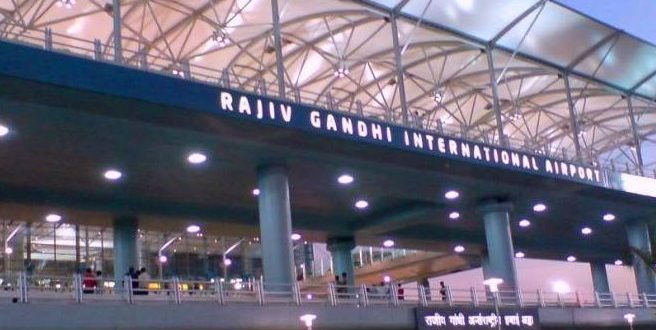 The GMR Group alongwith Malaysia Airport Holdings Berhad (MAHB) won the contract to built and run, finanace the airport under public private Partnership (PPP). GMR has 63% stake, the MAHB has 11%, Govt of State has 13% and the Airports Authority of India has 13% stake and are the consortium partners. The airport is constructed at the cost of Rs.24.780 million. The cargo terminal of the airpot can handle 1,50,000 MTs per annum and its full capacity is 15,00,000 MTs per annum. One of the longest runway in Asia, Primary Runway (Code F): L=4260m. Secondary Runway (Code E): L=3707 m Orientation: 09R/27L (Primary) & 09L/27R (Stand By) Four Rapid Exit Taxiways. The terminal building is a T Shaped building have 8 levels and 2 piers each of 25o m lenghth spread over a area o f 1,17,000 Sq. Meters, the terminal has 140 counters, 4 baggage claim belts and car parking area for 3200 Cars. Hyderabad Airport terminal has facilities for overnight pass enter stay at economical rates and dormitory both A/c and Non A/C and as individual rooms in standard and deluxe formats. Hyderabad Airport has a airport village with shopping options.

Hyderabad Airport terminal building has canteens serving breakfast, lunch , tea/snacks, dinner, general stores lined up and various Fast Food options to suit the tastes of the Passenger. Just in front of the terminal building you will also find play areas and most visited the go carting zone.

Hyderabad Airport is so successful airport, as we can measure its achievements by various international recognition RGIA has garnered. Airports Council International (ACI) RGIA has won first position in 5 to 15 million capacity. If the passenger flow was more than this  we are sure it would have won even the higher passenger category awards, so still great scope for RGIA. Rajiv Gandhi International Airport (RGIA)

According to the council of Head and Safety Management System Rajiv Gandhi International Airport (RGIA) – Hyderabad International Airport is the given a 5 Star rating which is like the safety oscar’s for any airport in the world. This universal recognition for RGIA Hyderabad Airport show the health and safety commitment of the airport.

Hyderabad Airport holds the distinction for best Cargo Airport and Best Cargo Terminal of the year for the year 2012 and 2013 by ACAAI.

Conde Nast Traveller has adjudged RGIA as the Favorite Indian Airport. Hyderabad Airport has many other awards and recognition’s to its credit.

Hyderabad is showcasing its competence to the world and has opened up to the world like never before and it is poised to take over the world, not just with charm, but with its capability!