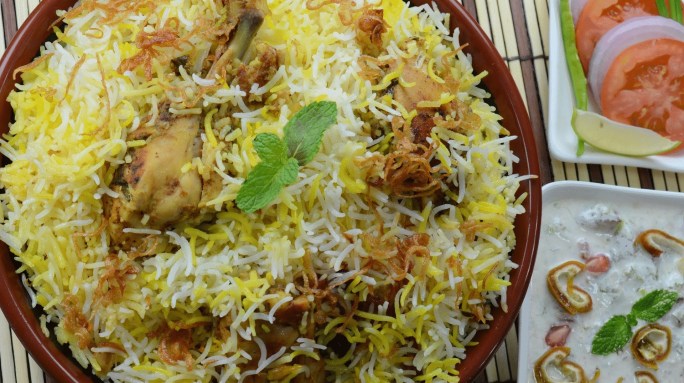 Is certainly Hyderabad’s Pride. Brought in by the Nizam’s of Hyderabad is a very tasty mouthwatering Non Vegetarian dish, could be based on different options of non veg,  Mutton, Chicken etc.,. Even you can get the Veg Option, try veg option unless and until you are strictly a Vegetarian. Based on a long rice called Basmati it is a special blending of Rice, Spices and the NON Veg option. Initially riced half boiled with spice and essence and the Non veg option marinated for a good duration and added to Half boiled rice and then steaming up which mean Hyderabadi DUM Biryani. You will find restaurants serving it in every noon and corner of Hyderabad. The best authentic option would be Bawarchi at RTC X Roads, Shadab Charminar and Shah Ghouse Charminar. Rest all may be big names by advertisement or so but not up to to the authentic Mark.

Mirchi Ka Salan (Chilly Curry) is a popular chili and peanut curry of Hyderabad. It is a must along with Hyderabadi biryani. When you cook the biryani it is custom that you dont miss this along with it. The dish main ingredients are green chillies (a Bit fat ones which usually are not that Hot), peanuts, till seeds, dry coconut, cumin seeds, ginger and garlic paste, turmeric powder, bay leaf and thick tamarind juice. Mirchi ka Salan is a traditional Hyderabadi dish prepared in every Muslim wedding and special occasions. 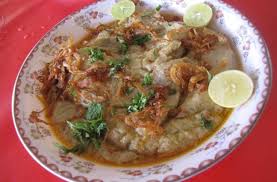 Hyderabadi haleem is a must in Hyderabadi muslim weddings. Particularly savoured during the fasting month of Ramazan during break of the fast. It is rich in proteins and light on the palate after the whole process of fasting. It is a stew made from meat, lentils and pounded wheat. Which is pounded the whole day to make a paste of it.  Local spices have given the hyderabadi haleem its unique taste giving it a geographical Identification status by Indian GIS registry as Hyderabadi Haleem. In hyderabad you will find Hyderabadi Haleem allthrough the year, particularly during month of Ramzan you will find it served all over Hyderabad at every nook and corner. Pista house is the licensed user of this denomination you will find haleem being served here allthrough the year. 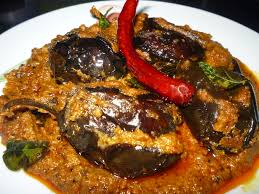 Bagara baigan is a very popular dish among Hyderabadi Households, it is made of brinjals cut in four or more portions but not separated, cooked with roasted  peanut gravy. Served particularly with white rice. Bagara Baigan

Double Ka Meetha is a very famous Hyderabadi dessert popularly served since ages. Made of soaked Bread in milk, sugar, spices, cardamom and saffron. It is very similar to shahi tukda another famous Hyderabad Dish. 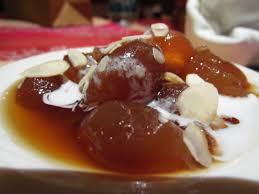 Khobani is Urdu for apricot, it is mainly made of soaked thick apricot after boiling. While serving it is garnished with almonds and thick cream.

Daalcha also known as Kaddu ka Dalcha is an Hyderabadi, Indian stew made from mutton, chana dal and Tamarind. It is a dish of Hyderabadi cuisine. The other variety, Kaddu ka Dalcha, is also a popular.

Naan is a leavened, oven-baked flatbread found in the cuisines of West, Central and South Asia made of maida. Though from majorly central asia and northern parts of India. It has become part and parcel of Hyderabadi cuisine. It is served mostly with Margh, Nihari Paya and other chicken items.

The word nihar orginated form arabic / urdu word Nahar which mean daybreak.  Very thin stew consisting of slow cooked lamb legs garnished to taste and served with naan or parathas. Hyderabadi Nahari is completely different from what is served in Delhi or other areas of India and Pakistan.

This special dish is served in the morning before going to Eid Prayers during the festivals of Eid Ul Fitr and Eid Ul Zuha. It is a very special festive breakfast dish on Eids.  It is  a pudding made of ingredients butter roasted vermicelli, whole milk, sugar, dates. Depending on the region, cardamom,pistachios, almonds, saffron and raisins are also added.

Last but not the least Andhra Meals, which is a everyday meal of all hyderabadi’s, it is sumptous assortment of various curries and appetizers along with rice. Everyone devours it be it vegetarian or non vegetarian. It is cooked in every household all through the city and served in various upscale restaurants as well as budget restaurants which are called Mess locally.