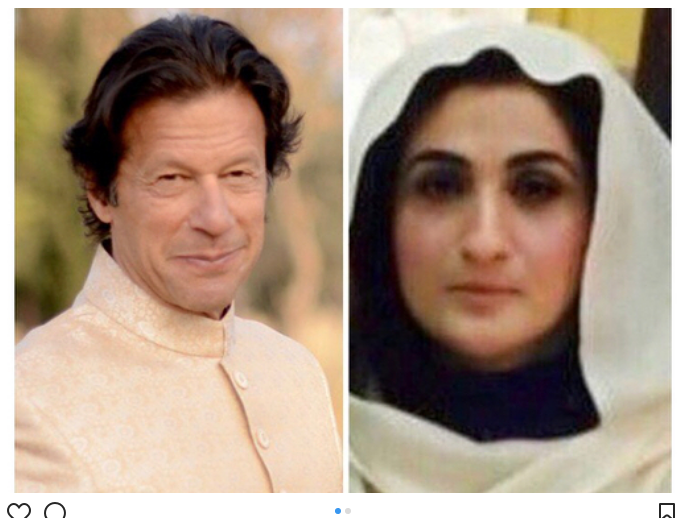 Party leader Inam-ul-Haq told that only close relatives, including the bride’s mother and friends participated in the marriage ceremony of Imran khan. However, Imran khan’s sister were not in attendance. Mufti saeed performed the nikkah in the presence of Awn Chaudhary and Zulfi bukhari who appeared as witnesses in nikkah ceremony.

Imran khan had first tied the knot with Jemima Goldsmith in 1995 that ended in divorce after nine years in 2009. His Second marriage was with well known TV anchor Reham khan in january 2015 that ended in divorse after ten months in Oct 2015.Now this time he married his spiritual leader Bushra maneka on suday night 18th of febuary 2018 in Lahore.

PTI media wing on suday night also released few pictures of Imran khan wedding, claiming that a simple ceremony was held in Lahore. The ceremony was a low-profile as the desire of Imran khan and Bushra Maneka .Inam-ul-Haq party leader expressed hope that the Imran khan’s marriage would prove blessednot only for him and his wife but alsofor the entire nation.

Bushra maneka belongs to the Wattoo clan and a Pir (spiritual advisor) based in PakPattan Punjab. She was formerly married to Khawar Farid Maneka , a senior custom official in Islamabad, with whom she was three daughter and two sons.

Imran khan first came in touch with bushra Maneka bibi for spiritual guidance a couple of years ago. Imran khan was very Impressed of her spiritual knowledge and guidance. Senior Investigation journalist The News Umar Cheema broke the story of Imran khan’s third marriage in 1st  January, 2018 this year. But Imran khan and his party always denied the report at that time. Although the marriage of with Reham khan was publicly announced on January 8, 2015 , there were reports that a nikkah had also taken place in early November 2015.

Imran khan said he had proposed marriage to bushra Maneka but denied reports that he had secretly wed with her, added that bushra Maneka has asked for time to make a final decision after consulting her family, including her children.

During an interview this month, Imran khan had said: “I met Bushra Maneka almost two years ago . I was very impressed of her deep spiritual knowledge and assesments. I will like to reiterate that every time I met her , with her family and alone, bushra Maneka has been in pardah. My intrest in her lies in the fact I have not seen or met anyone with bushra Maneka level of spirituality”.

Mumtaz Hayat Maneka , a young Aitchisonian  from the maneka clan, had said that the PTI leader Imran khan had a lot of reverences for bushra Maneka Pinki Bibi as a True Follower.

Imran khan had once said that he regarded bushra Maneka as his spiritual Advisor.