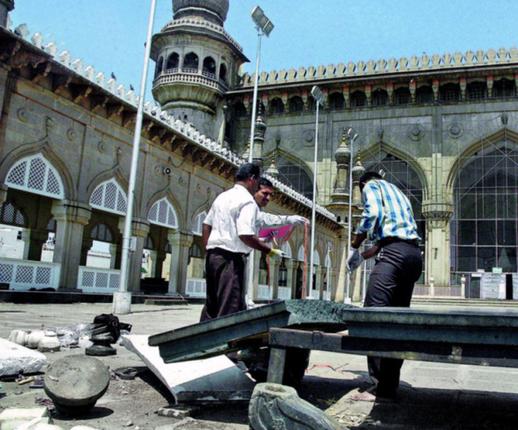 In a significant development, a witness in the Mecca Masjid blast case did a U-turn and retracted his statement given earlier to the Central Bureau of Investigation (CBI) some time ago. He claimed the agency recoded his statement under duress.
On May 18, 2007, a bomb went off on the historic Mecca Masjid premises, killing nine persons and injuring over 50 persons.

Contrary to the statement given to the CBI several years ago, Jharkhand agriculture minister Randhir Kumar Singh, who was then a Bharatiya Mazdoor Morcha (BMM) member, has informed the IV additional metropolitan sessions judge that he had no acquaintance with the late Manoj alias Sunil Joshi, a key accused in the blast case, as alleged by the probe agency .

The BJP minister accused the CBI officials of “forcibly”‘ taking his signatures on papers to prove the association between the key accused, Devender Gupta and Sunil Joshi, in the case. In the masjid blast case, nine persons, including Devender Gupta and Sunil Joshi, were accused and a few more persons were declared wanted by the CBI, which later transferred the case to the National Investigation Agency (NIA). Randhir Singh deposed before the judge on Tuesday . His deposition was inconclusive and it deferred as he has to identify the photograph of Sunil Joshi, which was to be arranged by NIA.

While giving his statement before the court, Randhir Singh said he knew Devender Gupta as a pracharak of Rashtriya Swayamsevak Sangh as they both hail from the same state. He said he had also helped Devender Gupta in organising local RSS meetings several years ago as both the organisations share similar ideology .