CHARMINAR was built as a thanks to allah by Quli Qutb Shah for overcoming the plague. Charminar, a magnificent monument with four graceful minarets reaching the sky, was built over 400 years ago. It was built by the founder of the ciy Mohammed Quli Qutub Shah in 1591, when he shifted from his seat of power the Golconda Fortress, which is another great ladmark the city boasts about. The Charminar is situated on the east bank of Musi river. Its central structure soars to a height of 180 feet. Structurally, the charminar is a perfect square, with each of the sides measuring 20m. Charminar structure has four huge arches facing the four roads leading from Charminar. To the center and over these arches there are four clocks setup in 1889. On each side of the structure are the imposing four minarets, which are four storey structure that rise to a height of 48.7 m. Each storey looks like a delicately carved ring around the minaret. One has to clib a flight of 149 steps to reach the top floor. Each minaret has a double balcony with a bulbous cupola. The minarets stand on a lotus leaf base. Sultan Muhammed Quli Qutb Shah, the fifth Qutb Shahi ruler, built it as a charm for the city. Charminar abutts the world famous mosque the Mecca Masjid and the famous laad bazar, famous for the lacquer bangles in countless designs and numerous hues, as well as some of the city’s oldest pearl and perfume shops are located here. Situated at a distance of about 7 Km from the Hyderabad railway station and 5 Km from the Hyderabad bus station, charminar called the “Arc de Triomphe of the East”, symbolizes the city and the signature icon.

Charminar A splendid piece of architecture. The symbol of Hyderabad. The landmark has become global icon of hyderabad making the most prominent structure in india and widely acclaimed for the floral design and symmetrical patterns all over the structure which simply feast to the eyes, hardly we believe anyone could pass through this beautiful structure without falling in love with it.

The four minarets make the structure unique in the architecture, they symbolize and honour the 1st four Rashidun Caliphs of Islam. The four minar’s or minarets have beautiful floral shaped round balconies with arches as a finger ring. The Minars as usual are dome shped at the end. You have to take 149 steps to reach over to top from the ground level.

Many have passed by the charminar without knowing that the whole structure is a beautiful mosque. The main mosque area is hidden from the the eyes of touris and locals alike as it is on the top floor and now it is not being used as a mosque.

Charminar structure holds one more secret, that there is a tunnel connecting the structure to the fort of Golconda, the seat of power of the Qutub Shahi Dynasty until the defeat by the Mughal Emperor of India Aurangazeb. It is believed that the tunnel provide much needed escapre route for the royals in case of a emergency. No one was able to prove that the tunnel actually exists till now.

The founder of Hyderabad was a fine poet, he had penned a couplet when he built the Charminar saying.

Charminar splendid piece of architecture. The symbol of Hyderabad. The landmark has become global icon of hyderabad making the most prominent structure in india as the city grows to international prominence. 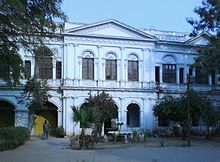 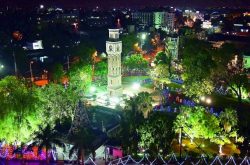 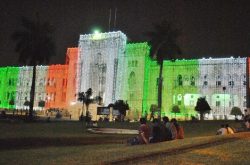