The Salar Jung Museum holds the distinction of being largest collection of artefacts by a single human being from around the world and is the third largest museum in India, also known as one family’s collection of million artefacts, looks highly impossible. Situated in the Dar Ul Shifa, on the southern bank of the river Musi, Salar Jung Museum has more than 43,000 artifacts, 9000 manuscripts and 50,000 books displayed in 38 rooms in the 2 storey museum complex. There are 20 such galleries on the ground floor and 18 gallery on the next storey. Each gallery is dedicated to different type of display. Salar Jung Museum is collection of Nawab Mir Yousuf Ali Khan Salar Jung III, former prime minister of the seventh Nizam Mir Osman Ali Khan. He had spent a huge amount of money collecting these artefacts over a period of 35 years.

Salar Jung Museum collections include valuable Indian art, Oriental Art, Far Eastern art, European art and children’s art and not to mention rare manuscripts including rare copies of the Holy Quran. Visitors will hardly pass through without getting impressed by the stone sculptures, bronzes, jade carvings, textiles and painted wooden sculptures of miniature paintings, modern art, ivory carvings, metal objects, weapons, carpets, furniture, paint ornaments, veneers, inlays, as well as oil and watercolors . Salar Jung Museum houses the world’s large collection of vintage clock and veiled Rebecca, which is available only in three museums all over the world. Veiled Rebecca is the centrepiece of the whole Salar Jung Museum, apart from this you will find european sculptures, chinese porcelaine, metal ware, jade carving, The paintings of legendary Raja Ravi Varma, Aurangzeb’s sword, Jade crafted daggers of Emperor Jehangir, Noorjahan and Shah Jaha, A wardrobe of Tipu Sultan, A tiffin box made of gold and diamond, some of the collections date back to 1st century AD. The artworks belong to various civilizations. Salar Jung Museum coveted British Musical clock is the most awaited and admired clock among the 300 clocks and timepieces displayed by the visitors. Visitors get seated and wait for the clock to strike and the cuckoo bird to appear with a melodious sound. Salar Jung Museum also houses a chemical conservatory, a library, a sales counter and cafeteria.

A Separate act was promulgated under which is calledr the Salar Jung Museum Act of 1961, under this act the museum has a board of trustees who report to the Governor of Telangana who is the ex officio chairperson. The museum was originaly at diwan devdi prior to this and shifted to present complex. During this process it is presumed that lot of artefacts were stolen or lost.

Located on the south bank of the river Musi, the Salarjung Museum is not far from other important monuments of the Old Town. The historic Charminar, Mecca Masjid, the Supreme Council, Central Library and the Osmania General Hospital are all within a mile of Salar Jung Museum.

The museum has a simple approach to road and rail. Nampally and Kachiguda are important stations at a distance of three miles. road Buses run regularly from all parts of the city Afzalgunj which is within walking distance of the museum.

Timings 10 am – 5 pm, closed on Fridays and Public Holidays,

Students with ID card are given 50% concession; 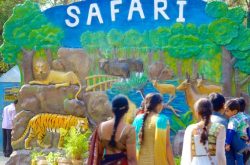 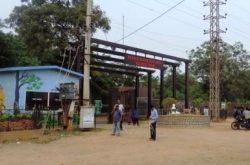 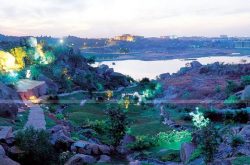