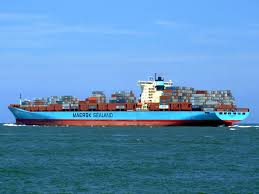 Mumbai, Mar 7 (PTI) An Indian sailor was among four seamen missing after a large container ship, owned by Maersk Line, caught fire in the Arabian Sea off the Lakshadweep coast, officials said today.

The Singapore-flagged Maersk Honam, a 330-metre long vessel, caught fire during a voyage from Singapore to Suez at around 1520 hours GMT (2050 hours IST) yesterday, forcing the 27 crew members to jump out into the sea, they said.

The vessel was around 340 nautical miles away from the Agatti Island in Lakshadweep, and four merchant ships in the vicinity were asked to help, the officials said, adding that 23 of the crew members have been rescued.

“When they (merchant ships) reached, they found that this vessel was completely on fire, ranging up to almost 25 metres high,” Inspector General K R Nautiyal, the commander of the Coast Guard West region, told reporters here.

An Indian Coast Guard (ICG) vessel having the capacity to take care of such a fire has been dispatched and should be reaching the spot by late this evening, he said. Search operations for the missing crew members were on with the help of the merchant Maersk ships.

The Indian Navy has pressed into service a long-range maritime patrol aircaft Boeing P-8I with search and rescue gear from Tamil Nadu to look for the missing crew, a Navy spokesperson said.

The missing Indian crew member has been identified as Sakim Hegde, one of the cooks on board, a senior official from the Directorate General of Shipping (DGS), Indias maritime regulator, which is also responsible for the safety of Indian crew members, told PTI.

The DGS official said the fire is suspected to have started in one of the 7,860 containers on board the ship, which had a capacity to carry 15,262 standard 20-footer boxes.

The rescued crew members are on board one of the merchant vessels and being taken to the nearest port Colombo, he said.

Among the 27 crew members were 13 Indians, including the captain, nine Filipinos, two Thai sailors, and one each from the UK, Romania and South Africa.

In a statement, Maersk Line termed it as a “serious fire” with the cargo on board and called the condition of the 2017-commissioned vessel as “very critical”.

“We are now doing our utmost to continue the ongoing search and rescue operations, by re-routing our own vessels with the assistance of vessels in the area ? most notably ALS Ceres that thankfully acted promptly upon our distress call ? and the local authorities,” Soren Toft, the chief operating officer and member of the executive board, A P Moller-Maersk, said.

Maersk statement said it has re-routed three ships — MSC Lauren, Edith Maersk and Gerd Maersk — which were passing through the Arabian Sea.

Two of the evacuated crew members are injured and receiving first aid on board ALS Ceres, it said.

“We will offer crisis counselling for the seafarers signing-off and returning to their families and our deepest empathy go out to the families of the crew members who are still unaccounted for,” Toft said. PTI