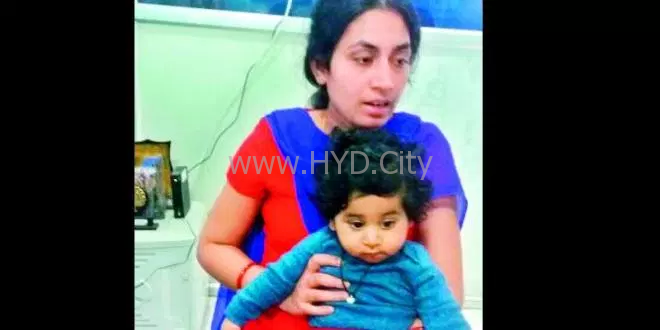 A non-resident Indian (NRI) software engineer, who arrived by a flight from the US, abandoned his pregnant wife and their eightmonth-old son at the Rajiv Gandhi International Airport (RGIA) in the wee hours of Thursday and left for his residence at Ramanthapur.
.
On Tuesday , Kirthi Sai Reddy and his 25-year-old wife Y Sirisha along with their son took a flight to India. The flight, which came via Dubai, landed at the Shamshabad airport around 2.30 am. “Stating that he will return in a few minutes, my husband left us both at the airport. Instead of returning, he along with his mother went to their house at Ramanthapur.

Also, he took my mobile phone and did not give any cash,” Sirisha said at a press conference later in the day. A distraught Sirisha, a B.Tech graduate, approached a police out-post at the airport and explained her plight to an assistant sub-inspector, who helped her talk to her parents over phone and later arranged a cab to reach her parents’ house at Vanasthalipuram.

Sirisha told the police that she had married Kirthi, a mechanical engineer, in April 2015 and for the last one year they had regular tiffs. She alleged that her husband was under the influence of his mother Vanitha. She claimed that she and her son were not even given proper food on the instructions of her mother-in-law during their stay in Virginia.

On January 21, 2017 her parents lodged a police complaint at the Vanasthalipuram police station against Vanitha and Kirthi Sai Reddy. “A case was registered under section 498-A (domestic violence) of the Indian Penal Code in January. We did not issue any look out notice (LON) since we did not have sufficient evidence.

Sirisha’s statement was not recorded as she was in the US then. The case was then registered based on a complaint lodged by her mother. Now that Kirthi Reddy is in Hyderabad, we will take action,” Vanasthalipuram inspector Murali Krishna told