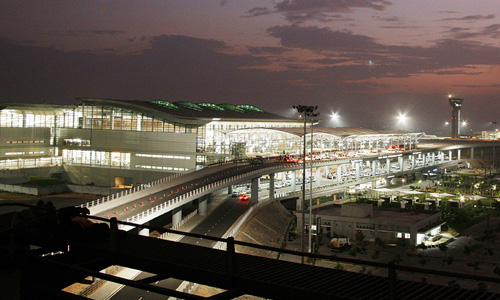 Hyderabad International airport is officially called Rajiv Gandhi International Airport (RGIA), is one of the modern and state of art airports in the world. Airport is located around 25 kms from main Hyderabad city. The Airport is designed to handle New Large Aircrafts (NLA), including the Airbus A380. The airport presently caters to 12 Million People Per Annum and is built with a capacity of serving 40 Million people Per annum. Hyderabad being the most largest central city of India is equally or at the most the same distance from all major cities of india up north and down south. Which has given the airport much traffic and has promoted hyderabad as hub of cargo and business activity. Rajiv Gandhi International Airport (RGIA) – Hyderabad International Airport is built on 22 sq.km area at Shamshabad on hyderabad – bangalore Highway and opened in March 2008. You can get all the direct international flights to major cities of the world.

The GMR Group alongwith Malaysia Airport Holdings Berhad (MAHB) won the contract to built and run, finanace the airport under public private Partnership (PPP). GMR has 63% stake, the MAHB has 11%, Govt of State has 13% and the Airports Authority of India has 13% stake and are the consortium partners. The airport is constructed at the cost of Rs.24.780 million. The cargo terminal of the airpot can handle 1,50,000 MTs per annum and its full capacity is 15,00,000 MTs per annum. One of the longest runway in Asia, Primary Runway (Code F): L=4260m. Secondary Runway (Code E): L=3707 m Orientation: 09R/27L (Primary) & 09L/27R (Stand By) Four Rapid Exit Taxiways. The terminal building is a T Shaped building have 8 levels and 2 piers each of 25o m lenghth spread over a area o f 1,17,000 Sq. Meters, the terminal has 140 counters, 4 baggage claim belts and car parking area for 3200 Cars.The airport terminal has facilities for overnight pass enter stay at economical rates and dormitory both A/c and Non A/C and as individual rooms in standard and deluxe formats. The airport has a airport village with shopping options.

The terminal building has canteens serving breakfast, lunch , tea/snacks, dinner, general stores lined up and various Fast Food options to suit the tastes of the Passenger. Just in front of the terminal building you will also find play areas and most visited the go carting zone.

This is so successful airport, as we can measure its achievements by various international recognition RGIA has garnered. Airports Council International (ACI) RGIA has won first position in 5 to 15 million capacity. If the passenger flow was more than this  we are sure it would have won even the higher passenger category awards, so still great scope for RGIA. Rajiv Gandhi International Airport (RGIA)

According to the council of Head and Safety Management System Rajiv Gandhi International Airport (RGIA) – Hyderabad International Airport is the given a 5 Star rating which is like the safety oscar’s for any airport in the world. This universal recognition for RGIA show the health and safety commitment of the airport.

It holds the distinction for best Cargo Airport and Best Cargo Terminal of the year for the year 2012 and 2013 by ACAAI.

Conde Nast Traveller has adjudged RGIA as the Favorite Indian Airport.It has many other awards and recognition’s to its credit.

Hyderabad is showcasing its competence to the world and has opened up to the world like never before and it is poised to take over the world, not just with charm, but with its capability!

Hyderabad has direct international connectivity from several major cities in Europe, Middle East and South East Asia. One can reach Hyderabad either with a direct connection from any of the major hubs connecting to Hyderabad or via New Delhi, Mumbai, Kolkata or Chennai. Rajiv Gandhi International Airport (RGIA)

Being geographically located in centre of India, Hyderabad is within a flight distance of 2 hrs from all metro cities of India. It is well connected by all domestic airlines to all major metro cities in India. Rajiv Gandhi International Airport (RGIA)

How to Reach – There are multiple options of Cabs plying from each and every corner of the city. Further TSRTC the state road transport runs Pushpak busses from main areas in the city. They have separate bus stops . Rajiv Gandhi International Airport (RGIA)

Pushpak – Airport Liner is a luxurious express bus service from airport to important destinations in the city & vice-versa.

Radio Taxi service at the Rajiv Gandhi International Airport is provided by leading service providers Meru and Sky cabs for the convenience of our customers. This is an air conditioned cab service with charges payable on the basis of meter reading at the end of the journey. Radio taxi can’t be pre-booked from Airport.

Only those taxis that have taken the license for operating Radio Taxi Service from the Government of Telangana can operate this service in Hyderabad Fare: Rs 21 per km, Minimum Rs 20 per km for the first 2 Km travelled