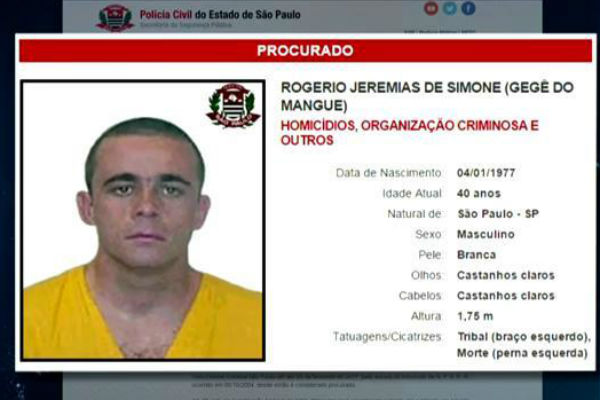 one of the chiefs of the criminal faction, First Command of the Capital (PCC) Rogerio Jeremias de Simone, Gegê do Mangue, was found dead this afternoon in Aquiraz, in the Metropolitan Region of Fortaleza. Next to him was found and already identified the body of Fabiano Alves de Souza, known as Paca. The information was confirmed to the G1 by the prosecutor Marcio Sérgio Christino.

According to the prosecutor, the two were fugitives from the Justice of São Paulo and leaders of the criminal faction. The two main suspects of the police for the killings are execution by rival faction or retaliation of the CCP itself. They were shot dead in the face and stabbed in the eye.

According to the Secretariat of Public Security of Ceará, the bodies were in the area of an unidentified Indian reservation. Police investigate who the perpetrators are.

Two bodies are found in an indigenous reservation in Aquiraz, Ceará
‘Hard blow’ says promoter
Prosecutor Lincoln Gakiya said on Sunday afternoon that the death of Rogerio Jeremias de Simone, Gegê do Mangue, one of the chiefs of the First Command of the Capital (PCC), acting inside and outside the prisons, “is a hard blow to the faction. ”

“It is a major casualty for the CCP,” Geha said. “It was considered to be the number 1 of the CCP in freedom, below only Marcola. , who works in the Special Action Group against Organized Crime (Gaeco) of the State Public Ministry in Presidente Prudente and is one of the promoters who investigate the faction more.
According to the prosecutor, “there is no information of conflict with other factions” about the death of Gege and Paca in Ceará. “According to our investigations, it is not a faction fight. Nobody knew, other than some members of the CCP, that they would be in Ceará at that time.” “It may be a rift within the faction that led to these deaths.”

Gegê do Mangue
Rogerio Jeremias de Simone was considered by the São Paulo Public Prosecutor’s Office one of the two numbers in the CCP’s leadership scale. There was a suspicion that he was controlling the drug trade in Paraguay.

In April 2017, prosecutor Rogério Leão Zagallo told the G1 that “the latest information received by the Federal Police is from the suspicion that Gegê has been in Paraguay since he fled.”

Also in April of last year, he was sentenced to 47 years, 7 months and 15 days in prison for the crimes of triple-homicide and armed gang formation. In order to determine the sentence, the magistrate took into account, among other factors, the accused’s criminal background, his social behavior and personality directed at criminal practices.

For the Public Ministry, Gegê and Abel ordered the executions of two criminals in the Sapé favela, in the neighborhood of Rio Pequeno, in the West Zone of São Paulo. They had given cell orders from within the chain to faction members to kill two group detainees outside.

He was released before his trial after Justice understood that there was too much time for him to be tried. After his release, he did not introduce himself to the authorities any more and did not go to his own trial. He was not located for having lied about the addresses that could be and has come to be considered a fugitive from Justice. His preventive detention was enacted.