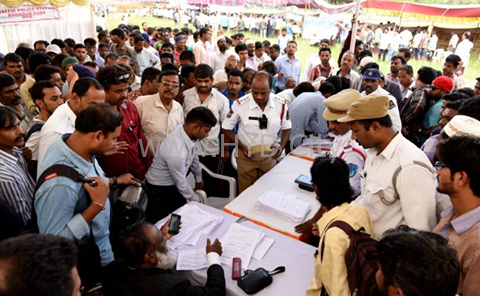 The offer of 50 per cent discount for pending challans for different driving violations has come as a boon to the traffic police, as they earned Rs 83 lakh in just three days.

At the three-day Lok Adalat held from Thursday to Saturday, the traffic police which had pending challans amounting to Rs 1.87 crore, recovered Rs 83.09 lakh from 70,103 challans. The recovery of pending amounts from the challans stood at 44.21 per cent, officials said.

“This time, although the turnout was less when compared to the previous year, citizens have used the opportunity to reduce the burden of pending challans,” said AV Ranganath, Deputy Commissioner of Police, Traffic-II.

The Hyderabad Traffic Police is divided into north and south divisions and around 25,049 pending challans of the north division have been cleared and another 10,164 challans from the south.

“The total number of pending cases cleared across three commissionerates is 70,103,” said LS Chauhan, Deputy Commissioner of Police, Traffic-I. However, compared to last year, those availing the Lok Adalat offer this year has dropped by almost 50 per cent. Last year, Lok Adalat, which was held consecutively for four days, had turn out of almost 1.50 lakh while this time it was 70,103, said officials.

The reason, traffic police said, could be due to enforcement relaxation during the months of October, November, and December last year. “Considering heavy rains and then because of the demonetisation effect, the enforcement was relaxed for three months which resulted in drop in pending challans,” officials added.