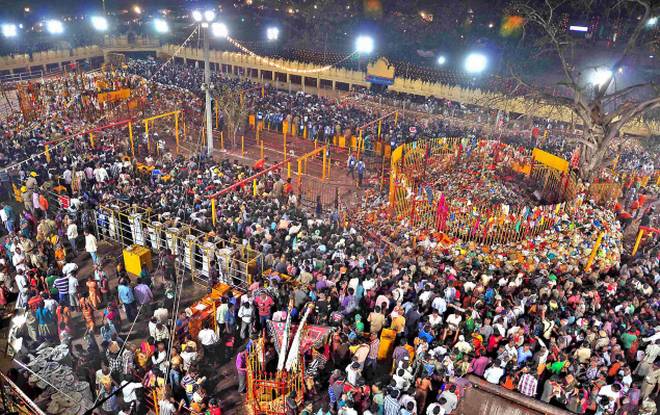 Sammakka Sarakka Jatara Medaram is the tribal jatara festival to honour the godesses followed in state of Telangana. The jatara or festival is held in Medaram Village of Tadvai mandal in the newly formed telangana district of Jayashankar Bhupalpally district. The Village of medaram is a very isolated place in the Eturnagaram Wildlife Sanctuary which is part of Dandakaranya the largest forest belt in the Deccan Plateau.

The tribals believe the Goddesses visit them during this time that is the reason the Sammakka Sarakka Jatara is celebrated. It Also commemorates the fight the mother and dauther has put across  with the then reigning rulers againtst injustices meted to the population about 6-7 centuries ago. Samakka is believed to be found in the jungle to hunters who saw her having some divine light and they take the baby and hand over to the tribal head of the region, who raises her to be samkka. Then it is claimed that she was married to the feaudatory tribal chief of the kakatiya dynasty who ruled from warangal city, she consumates the marriage and has two daughters and one son namely sarakka, nagulamma and Jampanna.  Medaram Jatara attracts largest number of devotees after the Kumbh Mela in Uttar Pradesh. It isad to be one of the largest congreation in the entire world held every two years with approximately one crore of ten million people attending it and just over a period of 4 days even from neighbouring states.

It is the festival without any vedic or brahmanic influence, people offer Jaggery to the goddess equal to the weight of the goddesses. Now the telangana governments patronage as a regional festival to it has given a more celebratory mode to the festival in the entire state of Telangana.