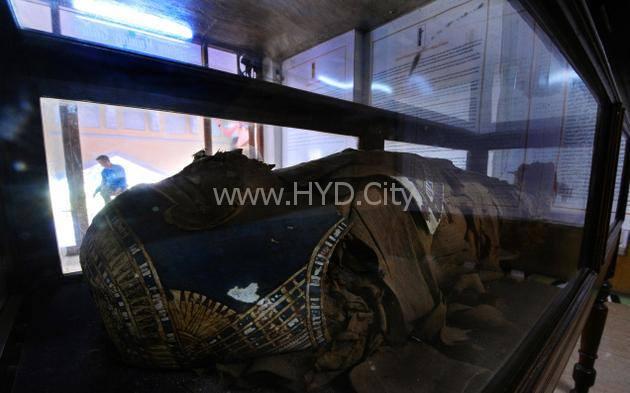 Telangana State Government has procured 58 lakh rupees worth Nitrogen filled Showcase for the Egyptian Mummy at Telangana State Museum in Hyderabad. The Mummy gifted to Nizam of Hyderabad Mir Mahboob Ali Khan by his son in law in 1920, put on display at Telangana State Museum in Hyderabad is being gradually shattering. After consultations with Egyptian Archaelogical Experts the previous governments were advised to preserve the mummy in a nitrogen filled showcase. The present showcase is not oxygen free, it was advised that the oxygen damages the mummy instead a nitrogen filled showcase should be used to preserve the Egyptian Mummy.

Acting on this advise the government has procured 58 lakh nitrogen filled showcase, though on the higher side but in view of the Egyptian Mummy which is very rare in the world, we believe it deserves it.  Its a privilege of Hyderabad and Telangana State to house a mummy in India and definitely it to preserve it a price big price tag is not a surprise.

It is stated by the experts that the nitrogen filled showcase will extend the life of the mummy another 500 years and more. Telangana State Museum is the 2351 year old mummy of the 18-year-old Ieshu, daughter of Pharaoh VI. It was brought to Hyderabad by Mahbub Ali Khan, son-in-law of VI Nizam, and donated it to the last Nizam Mir Osman Ali Khan. Initially, it had bright decorations and writings in turquoise, terracotta and gold, all of which have faded over time. But nevertheless, finally Telangana Governement has taken the best necessary step to preserve it for generations to come.