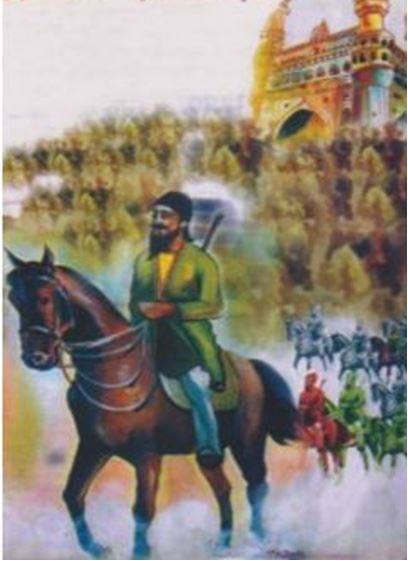 After a meeting at Mecca Masjid, Turrebaz Khan led a band of soldiers who are Rohillas( Afghans decent) , Arabs, students and other Nizam mutineers who rushed forward like a flash of lightning, to attack the British residency mounted an armed attack on the British Residency . About 500 Rohillas marched to the British Resident Col. Cuthbert Davidson’s castle , destroyed the castle walls and face huge causalities of British army and pro british under Turrebaz Khan . Turrum Khan fought like a lion against British and there allies then He was caught and detained in jail while his rebels were jailed in andaman and nicobar islands

he was put in couldn’t hold him. He was Headache for British and Nizam of Hyderabad soldiers After a year, he managed to escaped, and then was caught in the forest of an area called Toopran, near Hyderabad. The man who caught him, pro british Qurban Ali Baig, was the talukdar there. Turrebaz Khan was kept in captivity, then shot, and then his naked body was drag and hanged in the centre of the city to prevent further rebellion brutal death was given to him