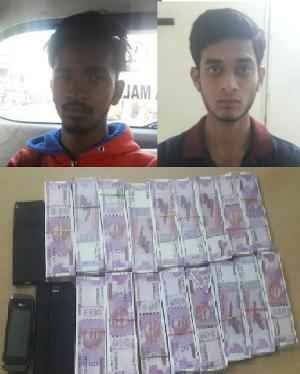 Two students who were circulating fake Rs 2,000 currency notes in the canteen of an engineering college were arrested by Cyberabad police on Thursday, together with two other persons, said to be the masterminds of the scheme.

DCP Shamshabad P.V. Padmaja Reddy said the main accused, Vijay Sharma, a jeweller from Bowenpally, and his friend Mohtesham Ali Khan, an executive at Bajaj Capital, had conspired to print the fake currency.
Vijay Sharma had purchased a colour printer-cum-scanner and photocopier from Chenoy Trade Centre in Secunderabad and had started the printing of the fake currency. They printed notes worth around

Rs 35 lakh and circulated them through Wajeehuddin Khan and Abdul Samad — students of Lord’s Engineering College. Wajeehuddin is Mohtesham’s nephew and son of the head of the forensic medicine department of Osmania Medical College.

The students used the notes in the college canteen. “After circulating the notes successfully in the canteen, their next target was shopping malls across the city,” the DCP said. Wajeehuddin and Samad spent about Rs 2,000 in the fake notes at the college canteen on two occasions. When they tried to pay the third time, the canteen staff became suspicious and alerted the police.

The police soon made inquiries and ended up seizing `20.76 lakh in the fake currency from Mohtesham, Rs 12.18 lakh from Vijay, Rs 1 lakh from Wajeehuddin and Rs 1.02 lakh from Samad.

Wajeehuddin told the police that Mohtesham had lured him into circulating the currency. He claims he was offered a commission of `10,000 in legal currency for every one lakh in fake currency. Wajeehuddin claims he took Samad’s help and offered him a commission too. All four have been arrested and sent to remand. The case is under investigation.